Working With “Either Or” Clues In Logic Puzzles

A lot of logic puzzles contain either / or clues where one set of facts is contingent on another. For example, if you look at clue six in the Game Of Risk puzzle pictured below you will see that it says “of the green player and the person with the most armies, one is Maria and the other dominated North America”.
Now, there are a number of bits of information stored in clues like these. To start with, the “either or” clues are SEPARATE events. So we understand straightaway that the green player did NOT have the most armies, and Maria did NOT dominate the North America part of the board, so we can places Xs accordingly in these squares. These have been circled in blue in the image below. 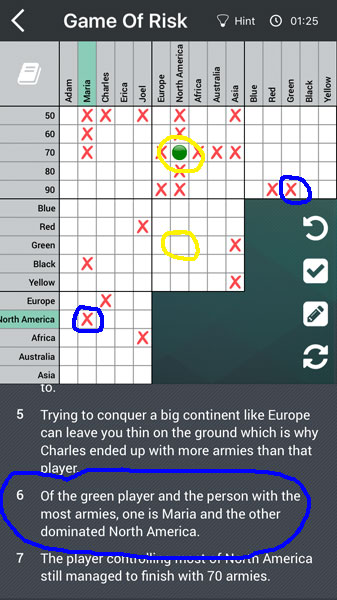 Once you’ve done this, you can see if we are able to solve the riddle of this clue and unlock the true answers. It is telling us that the green player is EITHER Maria OR North America. From the clues we have so far we are none the wiser as to which of these statements is true. However, the clue is also telling us that the person with the most armies is also EITHER Maria OR North America. Now if we look at the grid we can see that North America actually had 70 armies (circled in yellow) and NOT the most, therefore North America cannot equal the most armies. If North America cannot equal the most armies then it must equal green and we can fill North America and Green as a true answer (circled in yellow). Now we know that it also follows that Maria had the most armies and we can fill that square in as a true answer as well.
In summary – “Either Or” clues can give us a lot of information straightaway but sometimes their secrets have to be unlocked by filling in more of the grid so we can see which of the “Either Or” statements are true or false.